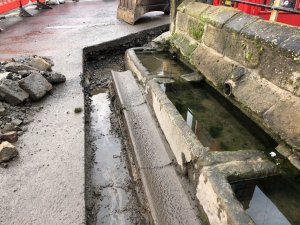 Finally, after many years of reporting, complaining and requesting work to rectify the water leak in the Market Place, repairs are underway and due to complete at the end of the week.

As everyone will be aware, there has been an on-going water leak to the side of the water troughs which runs across the road, causing hazardous conditions, especially in Winter when it freezes.

Severn Trent had inspected the site and said it was not a leak they were responsible for.

Derbyshire County Council (DCC) Highways team had repaired the hole in the road created by the escaping water a number of times, but to no avail.

The current excavation works have revealed the problem was being caused by a fractured water pipe. The pipe in question siphons off water from nearby house wells, and feeds the water troughs.

DCC have now repaired the pipe, the troughs are feeding properly and the water is again clear. They have also taken the precaution of putting in a French Drain to take away any excess water. This should mean not only is the problem finally solved, but there is a counter measure for any heavy rains or excess water from the wells in the future if needed.